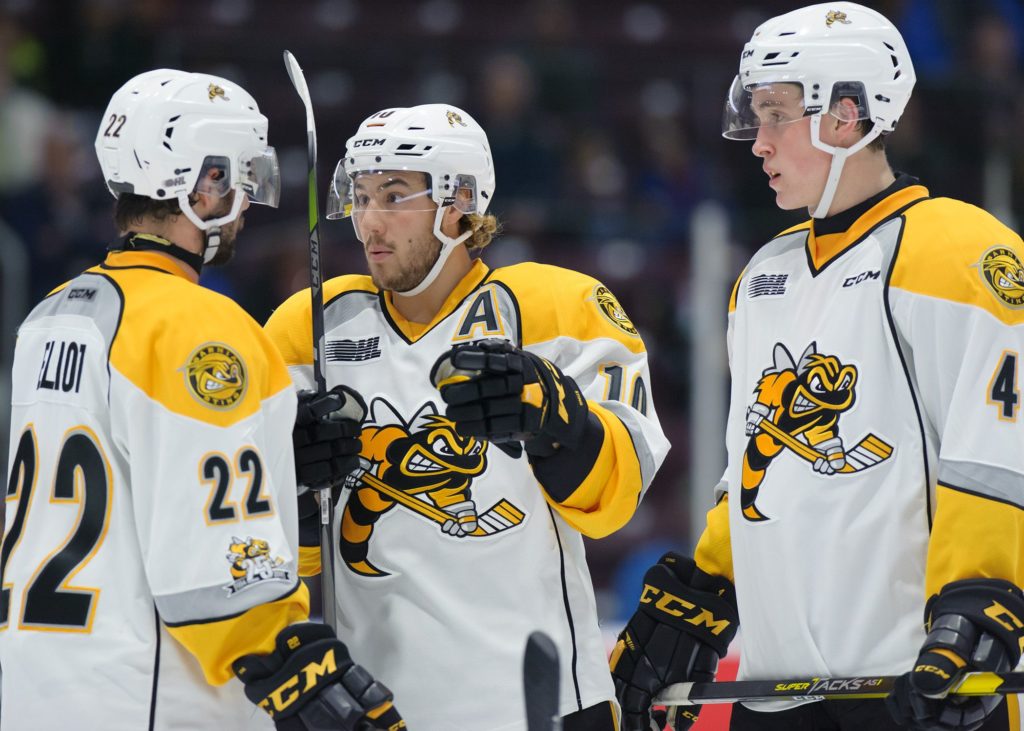 If you were looking for back-and-forth action all night long, you came to the right place. This was a high-tempo matchup right from the opening puck drop.

In the first period, the Attack made their mark early. Owen Sound captain Nick Suzuki sent a hard shot in on Sting goaltender Ethan Langevin. It handcuffed the young netminder, and Suzuki gathered his own rebound to give the visitors a 1-0 lead.

Sting defenceman Kelton Hatcher had our highlight of the first period. Hatcher made a bomb of an open-ice blueline hit on Attack forward Daylon Groulx.

In the second period, the Sting began firing away.

Sarnia forward Sean Josling took a perfect setup from linemate Hugo Leufvenius to tie the game at 1-1. Josling found himself with a clear path toward Attack goalie Mack Guzda and tossed the puck over the keeper’s shoulder.

Less than thirty seconds later, Sting rookie Jacob Perreault continued his torrid pace to start the season. Perreault buried a one-timer after linemate Franco Sproviero faked out Guzda with a perfectly deceptive pass. Sproviero hesitated like he was going to shoot, and then swiftly set up Perreault’s sixth of the campaign. 2-1 for the home side.

Not to be outdone, Attack forward Kevin Hancock replied quickly. Alan Lyszczarczyk sent Hancock in alone, and the overage forward scored his seventh of the season. 2-2.

Right back the other way, Sting captain Ryan McGregor put us back in the lead. McGregor swept out of the corner, deked Hancock, and potted his fourth of the season past Guzda. Once again, Sarnia had a one-goal advantage.

Owen Sound came back with force. Hancock scored his second of the game, and defenceman Brady Lyle tallied his first of the year. After two periods of play, the Attack held a 4-3 lead.

In the third, Langevin stood tall, making a massive breakaway save on Maksim Sushko. But the Attack were too strong, and scored two late goals to seal the deal. Aidan Dudas picked up one late, and Suzuki added the empty-netter. Tonight’s final score was 6-3 for the Attack.

Langevin made a strong twenty-five save performance.

We’ll return to action on Sunday afternoon! Come on down to Progressive Auto Sales Arena for a 2:05 PM puck drop against the London Knights. It’s another edition of the Battle of the 402!