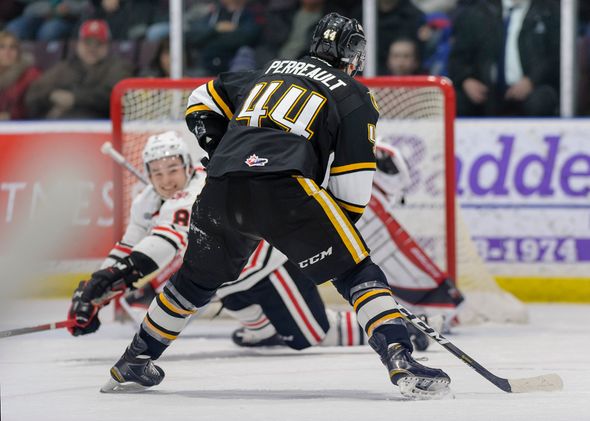 The Sarnia Sting hosted the Niagara IceDogs on Saturday night.

It was the IceDogs’ first visit to Progressive Auto Sales Arena this season. Though the Central division leaders boast a powerful offensive lineup, the Sting held the ‘Dogs in check all night long.

Through a scoreless opening period, the play was physical. Sting forward Curtis Egert tossed numerous hard body checks to keep the IceDogs on their toes. Shots were fairly low, with the two sides combining for only thirteen shots, but the frame was fast-paced.

Sarnia promptly responded. Sting rookie forward Jacob Perreault scored his twenty-second of the campaign to tie the game at 1-1. Mitch Eliot unleashed a booming slapshot that rebounded directly to Perreault. Stepping around a defender, Perreault smoothly buried it. 1-1.

Less than two minutes later, our captain hit the scoresheet. Returning to the lineup tonight, Ryan McGregor wasted no time in making an impact. McGregor scored shorthanded, as he’s done many times before, to give us a 2-1 lead.

With the IceDogs still on the same powerplay that McGregor used to score his tally, Niagara’s captain returned fire. Ben Jones fired one home at the back door to knot the game at 2-2.

IceDogs forward Kyen Sopa tipped in the go-ahead goal to give the visitors a 3-2 lead heading to the final frame.

Only a minute into the third period, Sting forward Jamieson Rees scored the ninth of his shortened season. Rees sent a wicked laser high into the corner over Niagara goalie Stephen Dhillon. We had ourselves a 3-3 tie game.

IceDogs forward Phillip Tomasino responded with a dangling goal. Tomasino’s twenty-third put Niagara ahead 4-3. It was a lead they would not relinquish.

Langevin was outstanding in goal for the Sting tonight. With an assortment of highlight-reel saves, Langevin was stellar. Check out an awesome stretched-out toe save below.

Tonight’s final score was 4-3. The official box score can be viewed here.

We return to action tomorrow night against the Hamilton Bulldogs. Take note of the special Sunday night start time – it’ll be 7:05 PM puck drop right here at The Hive!

NEXT HOME GAME: STING vs. BULLDOGS