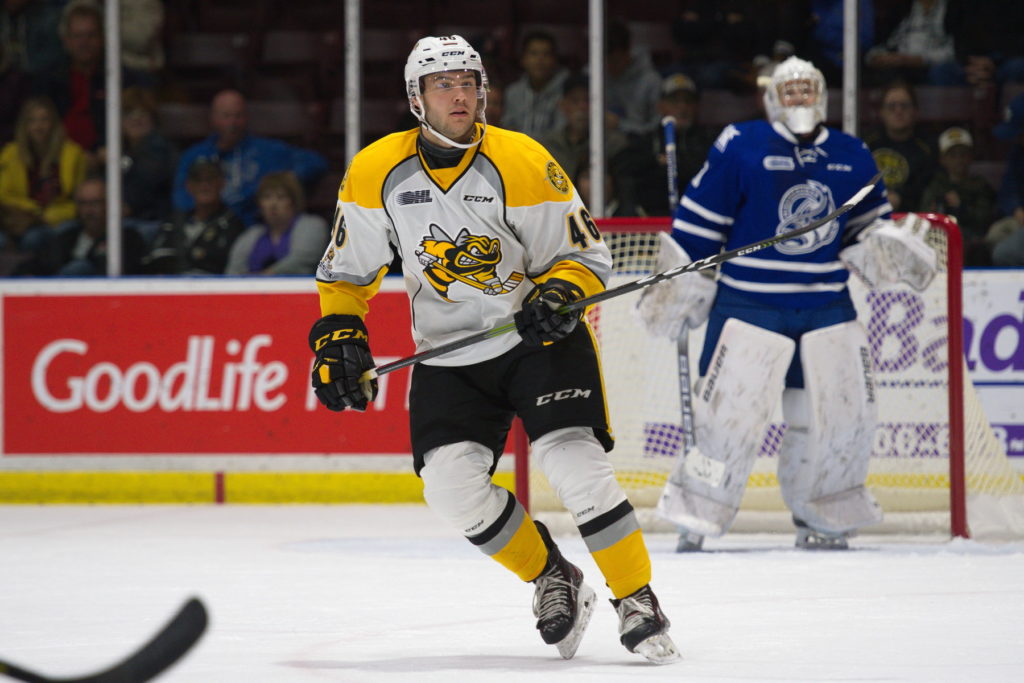 The Sarnia Sting visited the Mississauga Steelheads on Sunday afternoon at the Paramount Fine Foods Centre.

It was the concluding game of our busy three-in-three weekend. Ethan Langevin started in goal for us today after making some stellar stops in last night’s narrow loss to Peterborough.

In the first period, all was scoreless until late. Steelheads defenceman Ryan Wells opened it up. Wells unleashed a hard shot to the left of Langevin that went high under the crossbar. After one period of play, Mississauga held a 1-0 lead.

Moving into the middle frame, the majority of the period echoed the opener. There were not too many shots, but Sting forward Hugo Leufvenius and defenceman Nick Grima did manage to hit three posts in less than thirty seconds. With just over two to play in the period, we finally broke through.

Sting rookie forward Jacob Perreault released a ridiculous in-stride wrist shot that soared through Steelheads netminder Jacob Ingham. Calvin Martin had carried the puck with speed through the neutral zone before Jamieson Rees hopped on the puck. Rees dished a perfect pass to a trailing Perreault. The Hinsdale, Illinois native popped in his twenty-first goal of the season to tie the game at 1-1.

Steelheads captain Cole Carter put the home side back on top just before the end of the second period. Through two, Mississauga was up 2-1.

Early in the third, the Steelheads received a five-minute powerplay. Draft-eligible blueliner Thomas Harley took advantage. Harley released a bomb of a slapshot that got by Langevin. Mississauga suddenly had a two-goal lead.

We pushed hard to make a comeback. Sting defenceman Mitch Eliot scored with just over a minute on the clock, but time ran out before we could draw the game even. Thanks to some timely stops from Ingham, the Steelheads edged out a 3-2 victory.

Langevin made numerous big saves on the afternoon, including a massive late breakaway denial. In total, Langevin turned aside twenty-five shots.

We’ll return to action next weekend with two exciting home games against Eastern Conference opponents. First up is the Niagara IceDogs on Saturday night, and then the Hamilton Bulldogs will visit The Hive on Sunday. Pick up your tickets below!