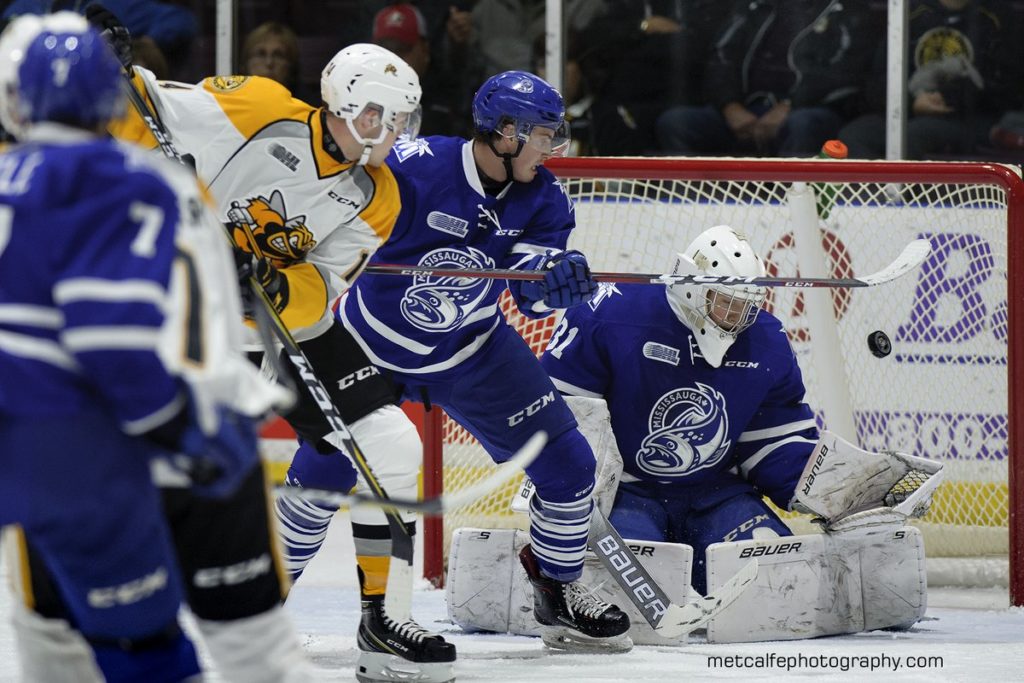 The Sarnia Sting hosted the Mississauga Steelheads on Sunday afternoon.

It was the third game of a weekend three-in-three for both sides. As such, things could have gone either way today.

In the first period, the Steelheads struck first. Second-year defenceman Thomas Harley scored a powerplay goal from the top of the right circle. Harley sent the puck past Sting goaltender Blair Coffin to give the visitors an early edge.

Midway through the period, Steelheads forward Owen Tippett doubled the lead. Tippett took a low pass from linemate Michael Little and scored a tap-in past Coffin.

Mississauga forwards Cole Carter and Filip Reisnecker also scored a goal each before the end of the opening frame.

Sting forward Brayden Guy got the home squad on the board. When linemate Franco Sproviero sent a spinning shot toward the net from the top of the zone, Guy was in the perfect spot to deflect the puck past Steelheads netminder Joe Ranger. It was Guy’s third of the season.

After one, the Steelheads held a 4-1 lead.

Moving into the second period, Carter scored his second of the afternoon for Mississauga. Following the goal, the Sting gave Coffin the rest of the day off. Aidan Hughes took over between the pipes.

Sting forward Sean Josling brought us back onto the score sheet. Josling took a setup pass from linemate Ryan McGregor just inside the opposing crease. Josling squared himself into position to fire and buried the puck past Ranger.

Carter scored his hat-trick goal for the Steelheads eight seconds after Josling’s tally.

The third period was scoreless. Sproviero engaged in a spirited scrap with Steelheads forward Keean Washkurak, and you can check it out below.

The final score this afternoon was 6-2 for Mississauga. An official box score can be viewed here.

We’ll return to the ice next weekend with two more home games! On Friday evening we’ll host the Owen Sound Attack for a 7:05 PM start. And on Sunday afternoon we’ll have another classic battle with the London Knights at 2:05 PM. If our first two games against both teams were any indication of what’s to come, you won’t want to miss these!