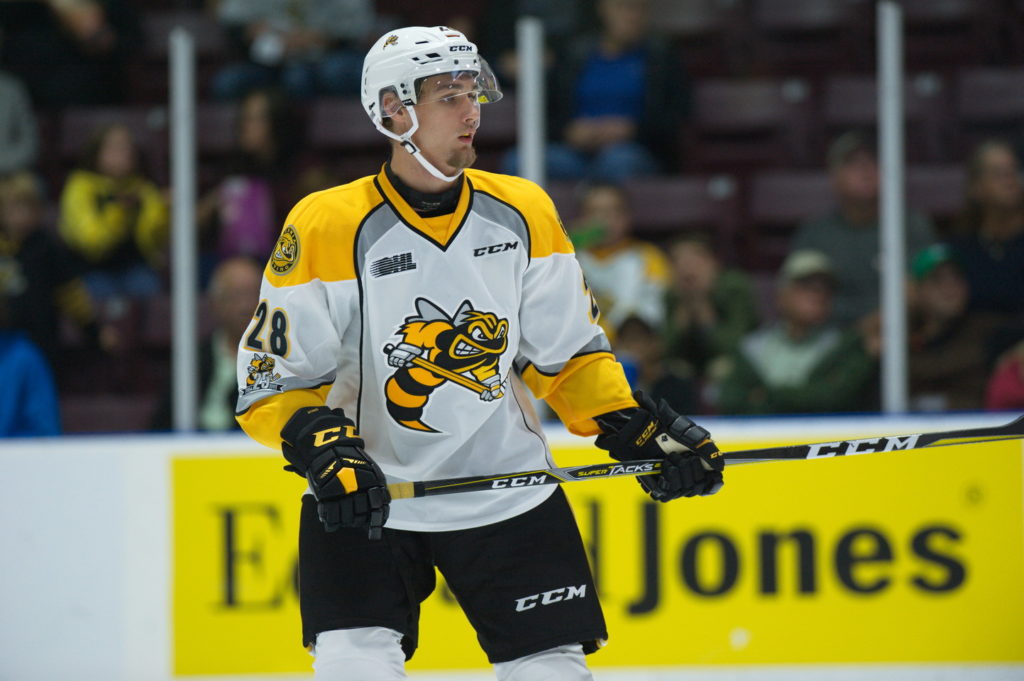 The Sarnia Sting grabbed a single point but fell to the London Knights 7-6 (OT) on Friday night in what was a back and forth affair at Budweiser Gardens.

Aidan Hughes got the nod for the Sting making 33 saves on 40 shot attempts while Chatham, ON native Joseph Raaymakers countered for the Knights.

It was the Sting who came out swarming early in the game. The aggressive forechek we saw early in the season reared its face once again at Budweiser Gardens and took the Knights by surprise. Calvin Martin got his second of the year after Nick Grima put a well positioned point shot on goal, which Martin tipped home to put the Sting up 1-0.

Sarnia Sting rookie Jacob Perreault is quickly making a name for himself, continuing to score goals in just his first Ontario Hockey League season. The sixteen year old put the Sting up 2-0 banging one past Raaymakes. Perreault now leads all OHL rookies with five goals so far this season.

The momentum would shift towards the latter half of the first period as the knights pressured the Sting. The home side would score two goals in under a minute as William Lochead and Anthony Stranges would tie this one at 2 heading into the room after 1.

The Knights would take control in the second as Cole Tympkin gave London their first lead of the evening. Connor McMichael would widen that lead with back to back goals, putting the Knights up 5-2. A double minor penalty found the Sting down on the scoreboard and with men on the ice. However, it did not seem to matter. Franco Sproviero would score a beauty shorthanded, quickly followed up by a second shorthanded marker from Anthony Salinitri on the same kill.

Knights forward Nathan Dunkley would attempt to swing momentum back into the favour of the Knights by taking of a Kelton Hatcher hit on Tympkin, that was not a good idea. Kelton Hatcher would feed Dunkley several bombs taking the decision.

London would grab another 2 goal lead however the Sting were relentless on this occasion. Mitch Eliot would notch his first goal of the year on a shot from the point. Swedish Import Hugo Leufvenius would follow that up with an absolute snipe to tie the game at 6 and send it to overtime.

Much like regulation the overtime frame was a back and forth affair as both teams traded quality chances three on three. Liam Foudy would eventually seal the deal for the home side on a nice individual effort and grab the extra point for the Knights.

The Sting return to action tomorrow night as they welcome the Guelph Storm to the Progressive Auto Sales Arena for a 7:05 puck drop. You can secure your seats by calling 519 541 1717 or online at ticketing.sarniasting.com