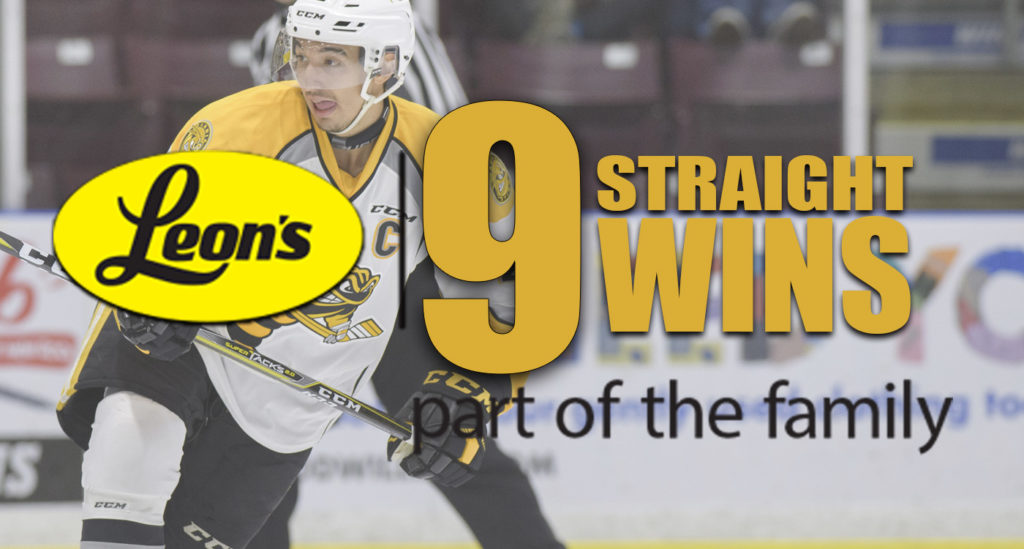 The Sarnia Sting visited the North Bay Battalion on Thursday. They scored many goals.

Tonight’s game was dominated by the Sting. It was an effort which saw the final score settle at 8-2.

Ryan McGregor opened the game up for Sarnia. With the puck bouncing all over the place in front of North Bay goaltender Julian Sime, McGregor was able to jump on a chance and send it into the twine.

No less than two minutes later, Sting captain Jordan Kyrou found the puck sitting near the right post next to Sime, and promptly flipped the puck into the net.

Brady Hinz continued to score goals tonight, adding his tenth of the season midway through the first. Theo Calvas had followed the puck deep into the offensive zone, quickly fired a pass from below the goal line, and Hinz was armed and ready. It was 3-0 Sting after the first period.

IN GAME | @BradyHinz keeps scoring goals! Hinz now has ten on the season, Sting up 3-0 on North Bay! #SwarmWithUs pic.twitter.com/5ocFMaIAHH

Two minutes into the middle frame, Kyrou scored his second of the game. It was a silky, silky goal, as Kyrou raced through the Battalion defence before potting another one past Sime. Check it out below.

IN GAME | @JordanKyrou cannot be contained! Absolutely races through the Battalion, scores his second of the night! #SwarmWithUs pic.twitter.com/za7OUan0O6

North Bay would get one on the board courtesy of forward Justin Brazeau. No matter, Sarnia scored again one minute later. It was a beautiful passing play finished off by Drake Rymsha. Kyrou drew the secondary assist, but it was rookie forward Jamieson Rees who drew the “wow factor”, sending a nifty cross-crease pass to Rymsha. It was 5-1 through two periods of play.

In the third, Kyrou completed the hat trick. He had all the time in the world sitting in the slot. Sting defenceman Colton Kammerer fed him the puck, and Kyrou took care of the rest. Tonight’s contest vaulted Kyrou into the OHL scoring lead with 18 points on the season.

Adam Ruzicka and Sean Josling would score before the game wrapped up, and the Sting completed an outstanding performance at Memorial Gardens.

Aidan Hughes recorded his third win of the season, making an incredible 38 saves on 40 shots against. Though all the scoring up front drew most of the attention, Hughes was calm and collected all night long. Hughes made some huge pad saves throughout the game, foiling any attempts the Battalion made at finding some momentum.

The Sting are back in action tomorrow, Friday October 20, against the Sudbury Wolves. Game time is 7:05 PM at the Sudbury Community Centre.