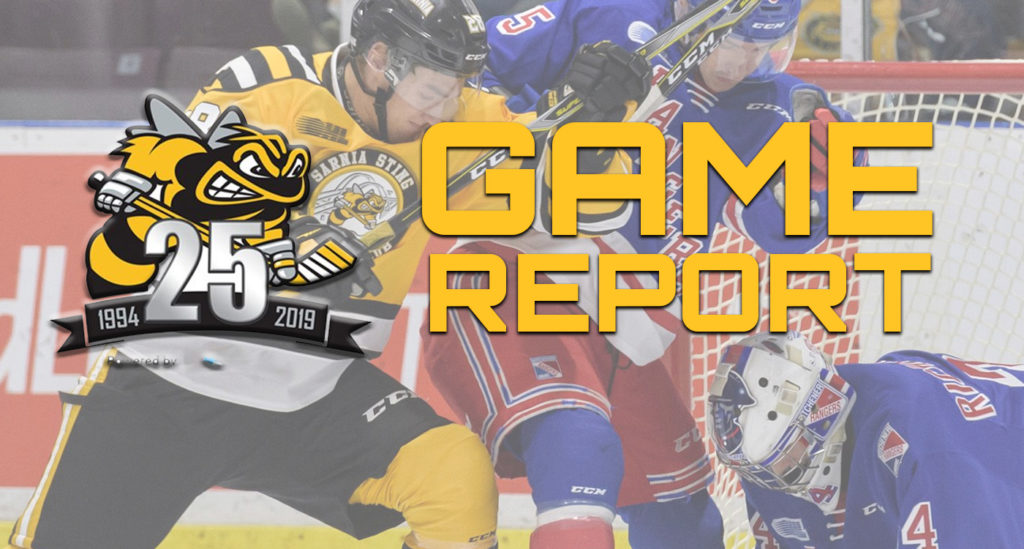 The Sarnia Sting hosted the Kitchener Rangers on Saturday night.

It was the first time the two teams have renewed pleasantries since their second-round playoff matchup last season.

Continuing a trend this weekend, tonight’s first goal was scored less than two minutes into the game. Rangers forward Rickard Hugg tossed one past Sting goaltender Ethan Langevin to give the visitors a quick edge. 1-0.

Sarnia didn’t get on the board in the first period, but it wasn’t for a lack of chances. With a ton of time spent on both the powerplay and penalty kill, the Sting generated shots regardless of how many men were on the ice. Our line of Hugo Leufvenius, Ryan McGregor, and Sean Josling became a fan favourite last season. Back together for tonight’s game, their chemistry was once again apparent.

Twelve seconds into the second period, Leufvenius was the one to get the boys rolling. When Kitchener goaltender Luke Richardson attempted to play the puck behind his net, but bobbled it instead, the puck came hopping out front. Leufvenius was there to capitalize, sending his first goal of the season into the cage. Tie game.

Just five minutes later, Sting rookie forward Jacob Perreault scored his fourth of the season. The goal tied Perreault for the lead in all rookie goal scoring across the Ontario Hockey League. Perreault lifted a nifty backhand over Richardson from just inside the right circle. It was 2-1 for the home side.

IN GAME | @JPerreault_44 scores his fourth of the season, tying him for the league lead in rookie goal scoring! 😎😎#SARvsKIT #ThePassionReturns pic.twitter.com/M5VdW943wv

Hugg responded for Kitchener midway through the frame, scoring his second of the night. Make it 2-2.

Sting captain Ryan McGregor was quick to fire back. After a scramble in the Kitchener paint, McGregor sent a knuckler past the Blueshirts’ netminder. McGregor’s third of the campaign gave the Sting a 3-2 lead.

Hugg scored his third goal of the night for Kitchener before the second period ended. The hat-trick goal came as the result of a perfect pass from linemate Greg Meireles.

Rangers veteran Joseph Garreffa scored the lone goal of the third period. Garreffa broke in on a powerplay to seal the deal. The Sting held Kitchener to just two shots in the final frame, but the road team scraped out a win. Tonight’s final score was 4-3 in favour of the Rangers.

We return to action for a three-in-three next weekend! First up is a visit to London on Friday evening. Game time at Budweiser Gardens is 7:30 PM. On Saturday night, we return to The Hive to host the Guelph Storm at 7:05 PM. And we’ll finish the weekend by hosting the Mississauga Steelheads at 2:05 PM on Sunday afternoon. You want Sting hockey, and we have lots of it!