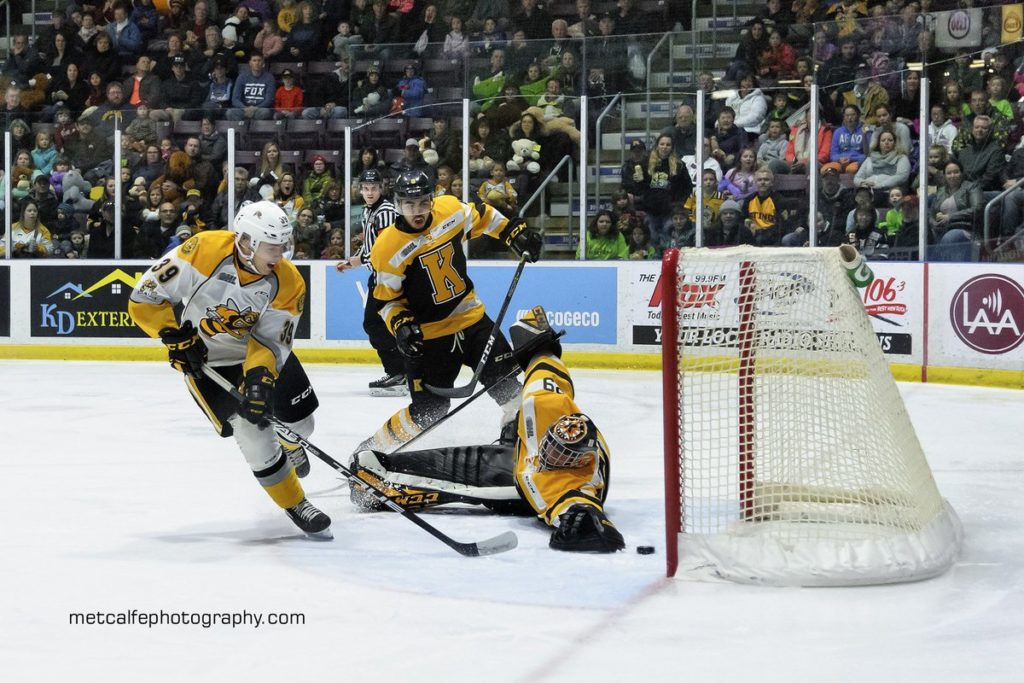 The Sarnia Sting hosted the Kingston Frontenacs on Saturday afternoon.

It was our twenty-first annual Teddy Bear Toss at Progressive Auto Sales Arena. In front of a large crowd at The Hive, a back-and-forth game saw a combined twelve goals hit the score sheet.

Starting off the action, the Frontenacs got on the board first. Kingston forward Matthew Hotchkiss opened the scoring with a spinaround shot that went low past Sting netminder Blair Coffin.

With all our supportive fans armed and ready to toss their bears, the moment arrived in style.

Sting forward Jamieson Rees was this year’s Teddy Bear goal scorer. Rees broke in on a breakaway, deked Fronts goaltender Ryan Dugas, and scored an outstanding tally. As soon as Rees’s arms rose in celebration, Sarnia fans tossed an amazing 3,910 stuffed bears and plush toys down on the ice. The Salvation Army will make sure every single one will head to a new home that needs them most. Thank you, Sarnia, for your outstanding display of support for our community.

Watch @_jamiesonrees make the bears soar at The Hive! An amazing goal for an amazing community this holiday season!#SARvsKGN #ThePassionReturns pic.twitter.com/vdqao9Kzi5

Midway through the first, Kingston grabbed the lead. Frontenacs defenceman Evan Brand sent a hard shot in on Coffin, and forward Brett Neumann gathered the rebound. 2-1.

On a late powerplay, the Sting tied things back up. Ryan McGregor recorded his twelfth of the season. McGregor received a hard pass from behind the net courtesy of Curtis Egert and fired away. After a long video review, it was determined that McGregor’s shot just got over the goal line. It was 2-2 after one period of play.

In the second, Kingston captain Ryan Cranford put the visitors back ahead. Neumann set up Cranford for a one-timer in the slot. 3-2.

Egert picked up his fifth of the season to knot the game at threes. Sting defenceman Ashton Reesor launched a bullet into the body of Dugas, who had no choice but to release a rebound. The puck landed on Egert’s stick, and then in the twine.

In an awesome moment, Sting rookie forward Nolan Burke scored his first career Ontario Hockey League goal. On a rush with McGregor, Burke drove hard to the crease. McGregor found Burke with a cross-ice pass for a beauty goal. Burke put us ahead 4-3.

Only about a minute later, the Fronts tied it back up. Jakob Brahaney’s fourth of the season gave us a square 4-4 contest.

Neumann picked up his second of the afternoon late in the middle frame. After being hauled down on a breakaway, Neumann was awarded a penalty shot. He made it count. After two periods of play, Kingston held a 5-4 lead.

In the third, the Sting made a hard push. Jacob Perreault scored his fourteenth of the season. With the marker, Perreault now leads all rookies across the league in goal scoring. We were all tied once again, this time at 5-5.

With eleven to play, Cranford gave Kingston a 6-5 scoreboard advantage. And when Neumann completed the hat-trick with two minutes left in regulation, the Fronts were bound for victory. Today’s final score was 7-5.

We return to action on Wednesday night. The London Knights will be in town for another Battle of the 402! We’ll see you at The Hive for 7:05 PM puck drop!