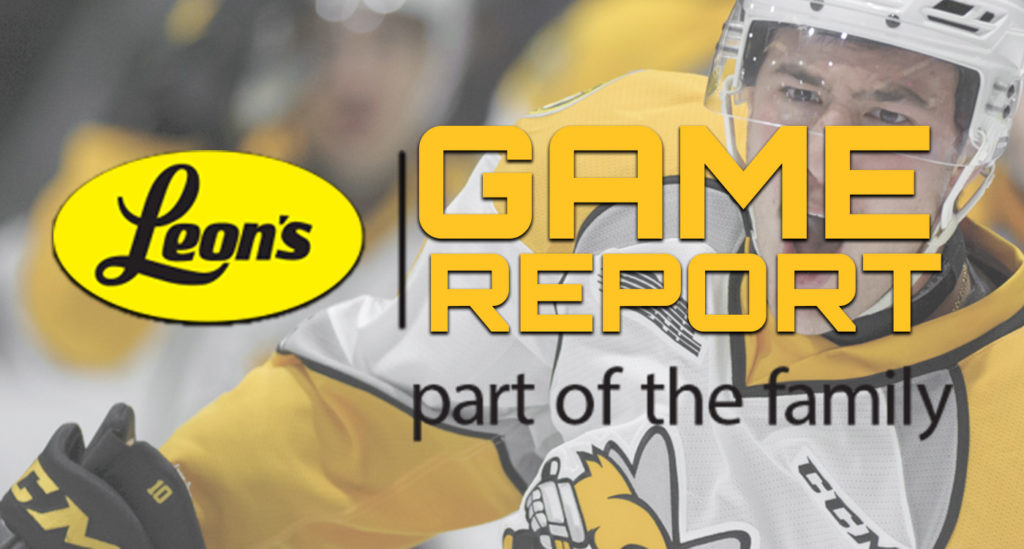 The Sarnia Sting visited the Erie Otters on Saturday night.

It was the second of three consecutive games this weekend for the Sting. Coming off last night’s loss to the Niagara IceDogs, the Sting ensured they emerged with a clear victory tonight.

In the first period, Sting forward Jordan Ernst scored his twenty-third of the season. Ernst got a quick step on an Otters defenceman just inside the blueline. Driving the net, Ernst went stick side on Erie goaltender Daniel Murphy. Recorded with six minutes left in the first, linemate Franco Sproviero picked up the sole assist.

Quick to respond, the Otters tied it up three minutes later. Erie forward Gera Poddubnyi scored his twelfth of the year. Through one, we were all knotted up.

In the middle frame, it took twenty seconds for the Sting to pot another goal.

Sting forward Adam Ruzicka scored his twenty-eighth of the season. It was also his eighth in the last five games. Ruzicka wired the puck past the Otters netminder, giving Sarnia a 2-1 lead.

Sting goaltender Aidan Hughes got the start tonight, and he sure took advantage of the opportunity. Hughes had the Otters covered all night long. Hughes was flashing leather on a routine basis. But this one right here, this was a beauty. Watch.

Midway through the period, with the Sting on the man advantage, defenceman Cam Dineen scored his fourteenth of the year. Dineen’s point shot found a way past the Erie goalie, and the Sting led 3-1.

Sting forward Michael Pezzetta had a goal waived off with just seconds to go in the period. After a very, very lengthy review, it was determined Ernst wasn’t completely off the ice on a change. So, no goal. The Sting took a two goal lead into the third.

In the final frame, the Sting added to their lead. On a four-minute powerplay, captain Jordan Kyrou set up Drake Rymsha for a simple tap-in from in close. Dineen picked up the secondary assist on Rymsha’s goal.

Tonight’s final score was 4-1 for the Sting. Hughes stopped 29 of 30 shots faced to record the win between the pipes. And congratulation to Pezzetta, who marked his one-hundredth career OHL point.

The Sting wrap up the weekend tomorrow night! We’ll be visiting the Hamilton Bulldogs at FirstOntario Centre. Puck drop is 7:00 PM.