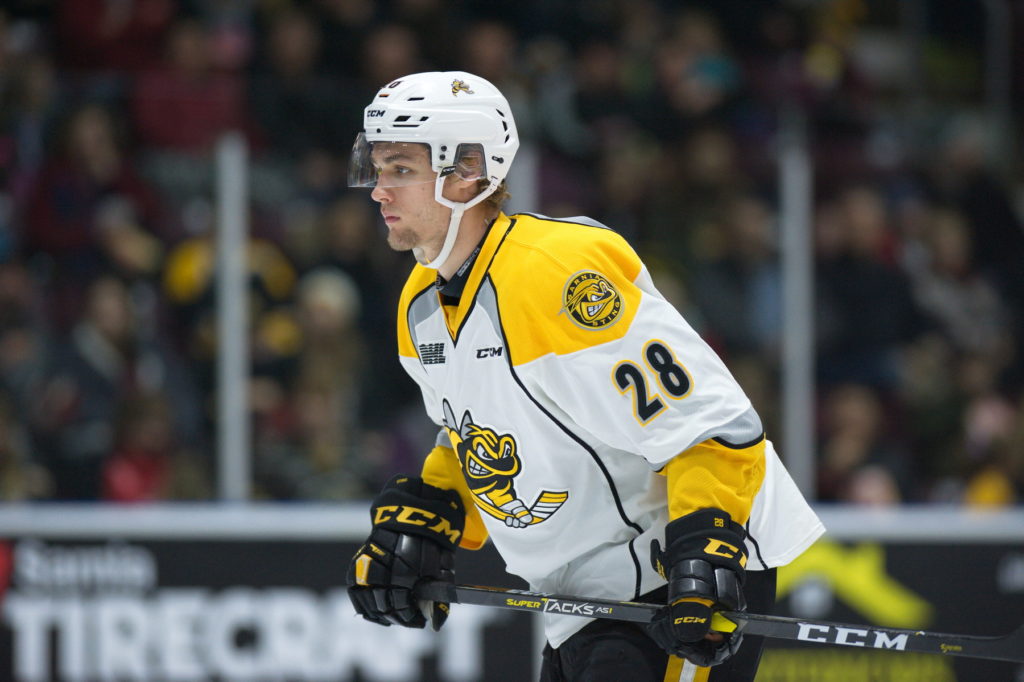 The Sarnia Sting visited the Hamilton Bulldogs on Saturday afternoon.

It came as our first and only visit to FirstOntario Centre this season. This was a big one for Sting forward Jamieson Rees. Playing in front of his hometown family and friends, Rees had a huge cheering section up in the crowd. And as we’ll get to in a minute, Rees sure did make his mark.

In the first period, Sarnia defenceman Mitch Eliot opened the scoring with a textbook wrist shot. From just inside the left circle, Eliot unleashed a perfectly placed snipe past Hamilton netminder Zachary Roy. Eliot’s ninth of the season gave us a 1-0 lead.

Late in the first, the Bulldogs responded on the powerplay. Hamilton defenceman Kade Landry sent a hard shot on Sting goaltender Cameron Lamour. Bulldogs blueliner Nicolas Mattinen got a piece of it and deflected the puck into the cage. After one period of play, we were tied 1-1.

In the middle frame, the Bulldogs found some home-ice momentum. Arthur Kaliyev and Zachary Jackson each tallied to give Hamilton a brief 3-1 lead.

It was Rees who had the answer. With all his hometown support cheering him on, Rees chased a puck deep into the Hamilton zone. Roy misplayed the puck in front of his own net and Rees forced the turnover. As the puck worked its way into Sting possession, Rees found himself with space in front of Roy and deked him out for the goal.

.@_jamiesonrees knows how to impress all his friends and family in attendance!

Forces the turnover and then dangles the goalie! 🔥🐝#SARvsHAM pic.twitter.com/xpU3QH7yD0

Heading to the third, we were only down one.

Building pressure throughout the third period, we finally drew even. On the man advantage, Sting forward Sean Josling tied the game. Ryan McGregor dished low to Adam Ruzicka, who sent a perfect cross-crease pass to Josling. As the puck slid between a defenceman’s sprawling legs, Josling readied and pounced for the tap-in. Thanks to some slick stickwork, we had tied the game at 3-3.

Thanks to Josling’s tying goal, overtime was a must.

In the extra frame, Kaliyev rushed in to score his second of the afternoon. The final was score was 4-3 for the Bulldogs.

Lamour made numerous flashy saves for the Sting throughout the game whilst turning aside twenty-nine shots.

We return to action tomorrow afternoon in Erie against the Otters! Puck drop is 4:00 PM at Erie Insurance Arena.