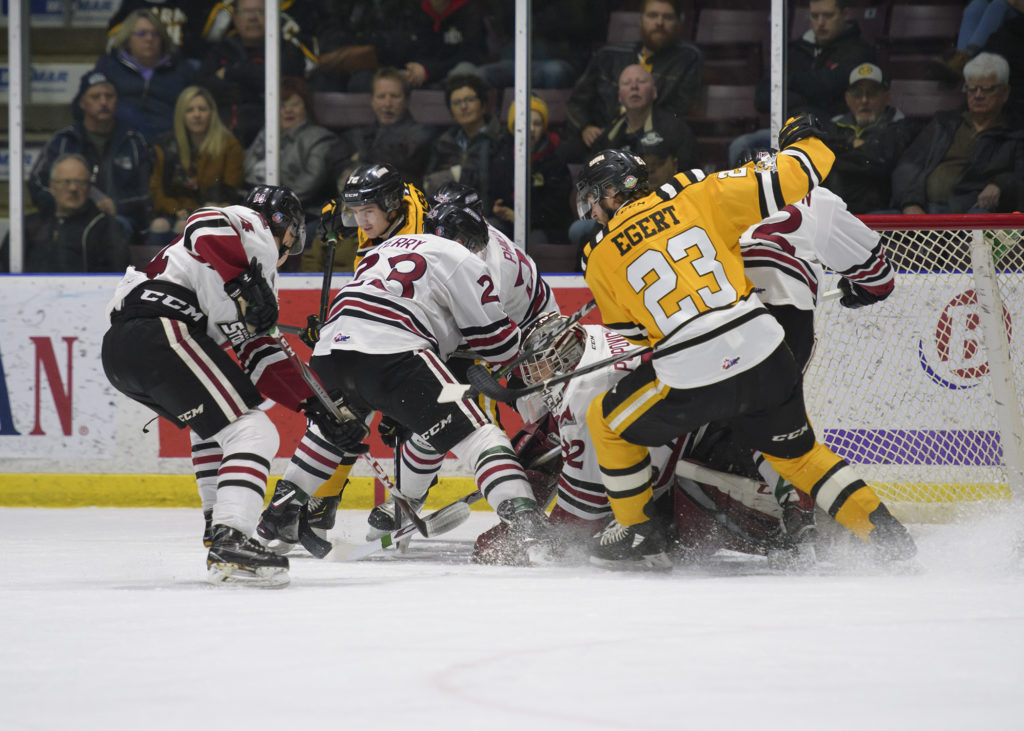 We were proud to host a Faceoff For Mental Health tonight in support of St. Clair Child and Youth Services. Before puck drop, we were honored to donate $2,000 in support of the youth in our community.

It was the second half of our back-to-back with the Storm this weekend. Last night in Guelph, we cruised to an impressive 6-2 victory on the road. Tonight, the Storm came in strong.

In the first period, each side traded chances until late in the frame. Sting rookie forward Jacob Perreault was the one who broke through.

With the Sting on a man-advantage, Perreault shot hard and low through Storm netminder Anthony Popovich. Perreault’s twenty-sixth of the campaign gave us a 1-0 lead after one period of play.

Moving into the second, the Storm found their stride.

Guelph forward Liam Hawel tied the game. After linemate Keegan Stevenson circled around behind Sting goalie Cameron Lamour, Stevenson centered the puck out front. Hawel was in the low slot and just got enough on his shot to get it through Lamour.

Storm forward Nick Suzuki put the visitors ahead. Suzuki shot a squeaker of a puck through Lamour as he broke into the offensive zone with speed. It was a 2-1 game.

Domenico Commisso added another for Guelph late in the second to give the Storm a 3-1 lead after two frames.

In the third, we skated real well and looked like we might make a comeback. But the Storm had it all going right tonight. Hawel added his second of the game to make it 4-1. It held as the final score.

Lamour had another awesome game for the second consecutive evening, turning aside nineteen of twenty-three shots faced.

We’re right back in action tomorrow afternoon! Be sure to join us for a very special game: eSports at The Hive is being presented by Lambton College! Fun for the whole family, and there’s even six-dollar kids tickets! This one is going to be an event you’ll remember!