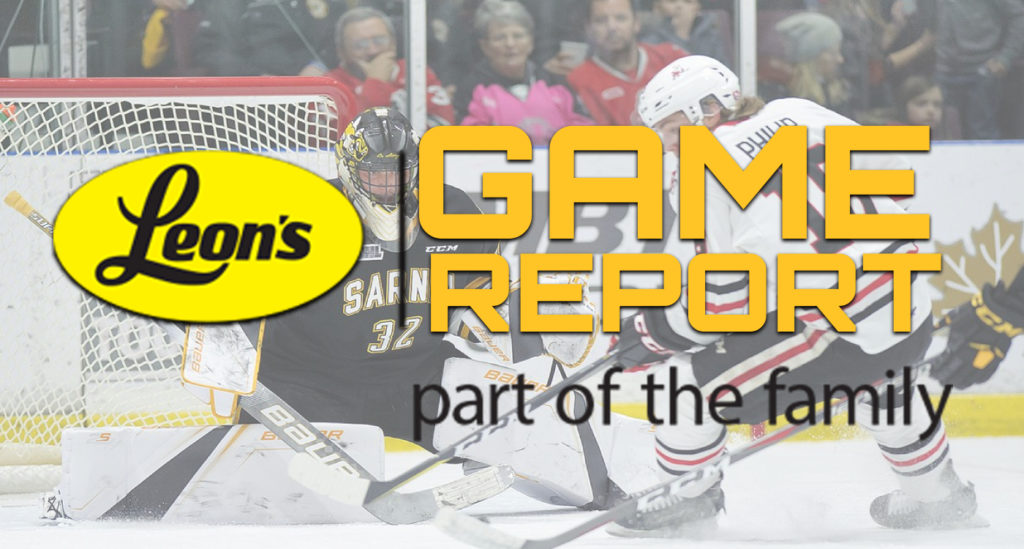 The Sarnia Sting hosted the Niagara IceDogs on Saturday night.

After last night’s game was postponed to Tuesday, February 27, the Sting came into tonight’s matchup with fresh legs. It showed early.

Right off the bat, Sarnia’s lethal second line of Anthony Salinitri, Jonathan Ang, and Drake Rymsha was creating hectic scrambles in the Niagara crease. Rymsha made it clear that he would be parked in front of IceDogs’ goaltender Stephen Dhillon all night long.

Sting overage forward Jordan Ernst would be the one to get things rolling. Franco Sproviero went into attack mode on the forecheck, causing an IceDogs turnover on the side wall. The puck popped out to Jamieson Rees, who found Ernst down low. 1-0 game.

In the second period, the Sting continued to push the play. Drake Rymsha scored to make it 2-0. Sting defenceman Nick Grima sent in a shot from the blueline. Rymsha was cruising by in front of Dhillon, and tipped it through the IceDogs netminder.

Just thirty seconds later, Sting forward Anthony Salinitri continued his red-hot pace. Salinitri rushed in down the middle of the ice and sniped high on the Niagara goaltender. Salinitri’s twenty-third of the year was assisted by Jonathan Ang.

In the third period, things got a little crazy.

Queue up Jordan Kyrou. Stepping up in crunch time, the Sting’s captain put the home side ahead 4-3 with just two minutes remaining in regulation time. Kyrou’s twenty-eight of the year gave helpers to defenceman Connor Schlichting and linemate Michael Pezzetta.

When the IceDogs pulled their goalie for the extra man, Singer tied the game at four with thirty seconds to go. Overtime was on the way.

In the extra frame, Sting defenceman Cam Dineen went to work. Dineen buried the game-winner with less than a minute remaining in overtime. Call it a crazy 5-4 overtime win.

Of note, our newest addition, defenceman Mitch Eliot, made his debut in a Sting uniform. Eliot joined us this week after spending the past season-and-a-half with Michigan State University. Eliot finished his first OHL game with one shot on goal.

Sting goaltender Justin Fazio stopped 37 of 41 shots faced between the pipes tonight. Recording his thirtieth win of the year, Fazio set the new franchise record for goaltending wins in a single season. The entire Sting organization congratulates Fazio on this incredible achievement.

With tonight's victory, @JustinFazio97 has set the new franchise record of 30 goaltender wins in a single season!

Join us in congratulating Justin on this incredible achievement!#SwarmWithUs pic.twitter.com/oZHbGUpk2f

Join us tomorrow afternoon when we host the Sudbury Wolves! We’ll see you at 2:05 PM right here at Progressive Auto Sales Arena!