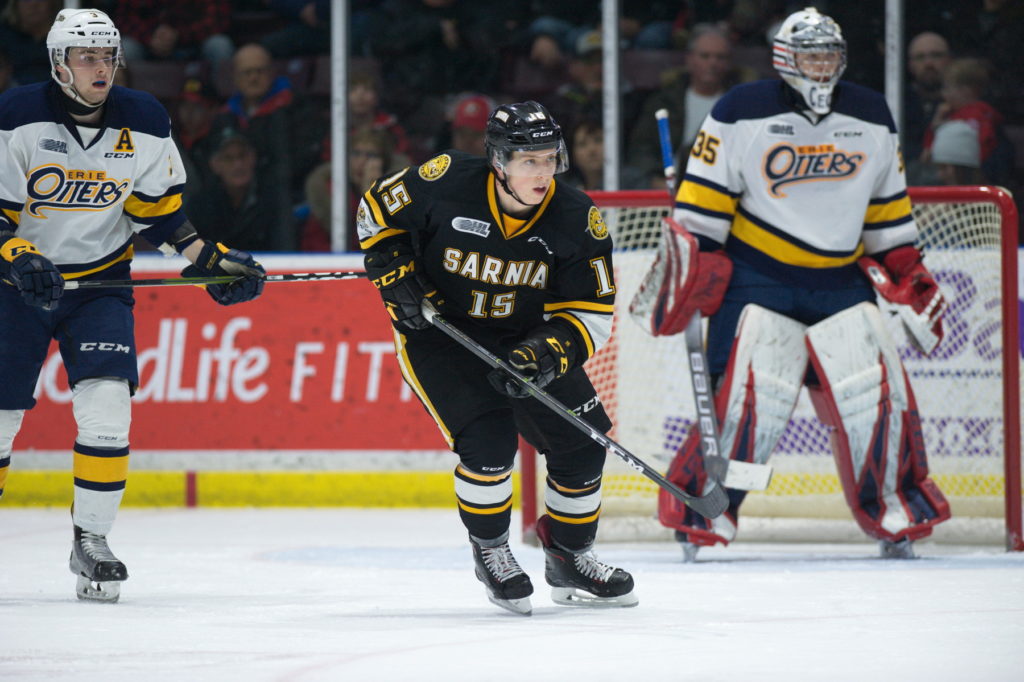 The Sarnia Sting visited the Erie Otters on Saturday night.

It was a huge battle at Erie Insurance Arena. Coming into the evening, we were five points ahead of the Otters in the Western conference standings. This was a big one.

In the opening period, our first major opportunity came off the stick of Sting rookie forward Jacob Perreault. Perreault wired one off the crossbar behind Erie netminder Cole Ceci. Hugo Leufvenius had found Perreault with a slick pass off the half-wall. Still scoreless, we carried on.

Otters forward Gera Poddubnyi started the scoring. With the home team on the powerplay, Poddubnyi hesitated just enough on his snapshot to change its angle. Poddubnyi sent the puck past Sting goaltender Cameron Lamour to make it a 1-0 game.

Less than a minute later, Otters defenceman Kurtis Henry made it 2-0 with a shot from nearly the same spot. After the first, Erie held a two-goal lead.

Leufvenius brought us within one. The towering power forward scored his team-leading thirty-fifth goal of the season. Leufvenius was parked and ready on the doorstep next to Ceci. After defenceman Mitch Eliot’s shot rebounded loose in the crease, Leufvenius was there to pop it home. 2-1.

Midway through the second stanza, Otters defenceman Jamie Drysdale found a powerplay lane to make it 3-1. Chad Yetman extended Erie’s lead shortly after with yet another powerplay goal. Looking to find a spark, Sting goaltender Ethan Langevin came into the game to relieve Lamour. Through two periods, it was 4-1.

In the third frame, it was time to charge back. Sting captain Ryan McGregor led the effort.

McGregor found linemate Sean Josling to bring us within a pair. A quick touch pass from McGregor was all Josling needed to score his nineteenth tally of the campaign. Ashton Reesor recorded the secondary assist. We now had a 4-2 matchup.

McGregor went back to work moments later, scoring one for himself. The captain was in the perfect position beside Ceci to pot a wide-open goal. A shot from Leufvenius ricocheted directly to McGregor, and we had a one-goal game.

We continued to pressure with two powerplays down the stretch. But we just couldn’t knot it up. Otters forward Maxim Golod scored an empty-net goal to make it a 5-3 final score.

Of note, Sting defenceman Kelton Hatcher returned to the lineup tonight after an extended injury absence. Hatcher resumed right where he left off and was a physical force throughout the evening.

We’ll return to action tomorrow afternoon in Niagara! Puck drop against the IceDogs is scheduled for 2:00 PM at the Meridian Centre.