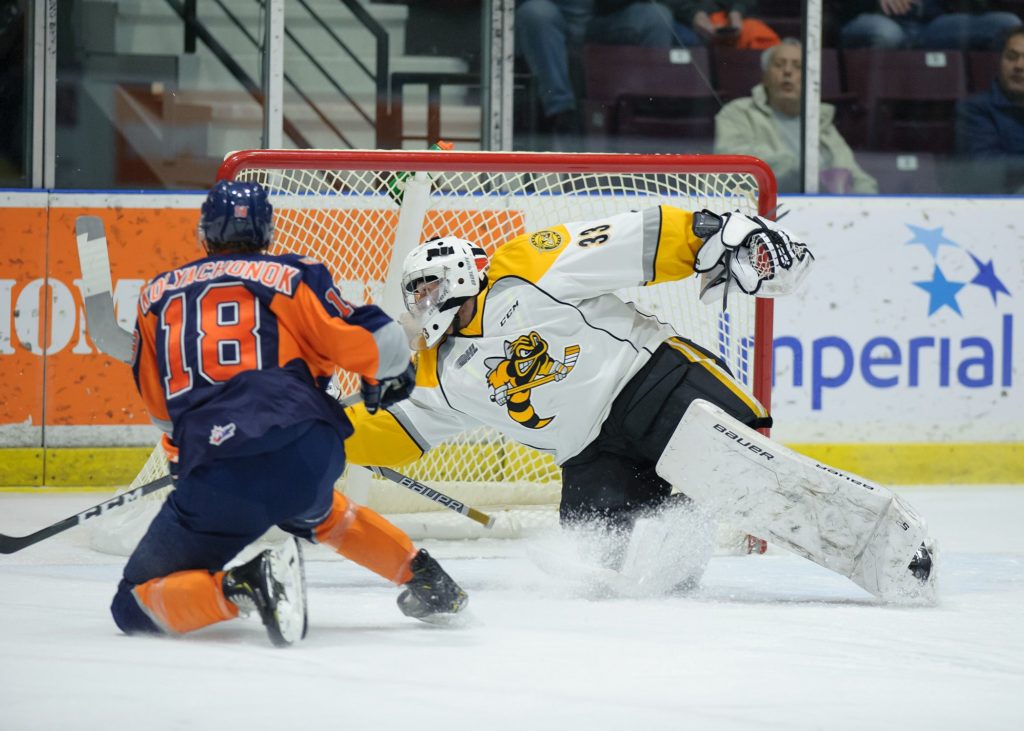 The Sarnia Sting hosted the Flint Firebirds on Friday night.

It turned out to be a wild evening of goal scoring at Progressive Auto Sales Arena. Let’s get right into it.

In the first period, things got crazy. Firebirds forward Ty Dellandrea opened the scoring thirty seconds in. Dellandrea sent one high blocker past Sting netminder Aidan Hughes. When the Firebirds added another one just moments later off the stick of Kyle Harris, Sarnia found themselves down 2-0 early.

Sting forward Curtis Egert promptly responded. Egert sniped a puck over the shoulder of Flint goalie Emanuel Vella. We were within a goal.

Rookie forward Theo Hill tied things up only twenty seconds after Egert’s goal. A deflection in front of Vella gave Hill his third of the season. We were tied at 2-2.

Dellandrea came back right away for the Firebirds. His second of the game put the visitors back on top 3-2. Keep in mind, we were only three minutes into tonight’s matchup. Sting goaltender Ethan Langevin took over between the pipes.

Second-year Sarnia forward Brayden Guy knotted the game up at 3-3. Guy wired a hard shot from just between the circles past Vella. Following the goal, Luke Cavallin replaced Vella in the crease.

Twenty-five seconds after Guy’s tying goal, Flint forward Eric Uba once again put the Firebirds ahead. Minutes later, Uba scored another one, this time shorthanded. Uba deked out Langevin to give Flint a 5-3 lead heading into the first intermission.

Those five goals were all the Firebirds would get tonight.

The Sting fired back with four goals in a dominating second period.

Sarnia captain Ryan McGregor kicked off the comeback. McGregor scored a beauty shorthanded goal to bring us back within one. The tally marked the league-leading eleventh shorthanded goal scored by the Sting this season.

Sting forward Calvin Martin tied it up just moments later. And to no one’s surprise, just seconds after Martin’s goal, Hugo Leufvenius scored for the tenth game in a row. Martin dished an awesome reverse pass to Leufvenius, who deked out Cavallin. We held a 6-5 lead.

1️⃣0️⃣ games in a row with goals for Hugo!! Check out the sweet reverse feed from @calvin_martin5!#ThePassionReturns pic.twitter.com/iQLzteR5bu

Rookie forward Jacob Perreault extended the lead to 7-5. Perreault sent in a long shot that flew past Cavallin to give the Sting a two-goal advantage. After the goal, Cavallin received a game misconduct for shooting the puck over the glass. Vella returned to the Firebirds’ crease.

Adam Ruzicka finished things off. With the lone goal of the final frame, the skilled Sting forward buried an empty-netter to seal the deal.

Tonight’s final score was 8-5. The official box score can be viewed here.

We return to action on Sunday in London. It’s another edition of the Battle of the 402! Puck drop against the Knights is 2:00 PM at Budweiser Gardens.