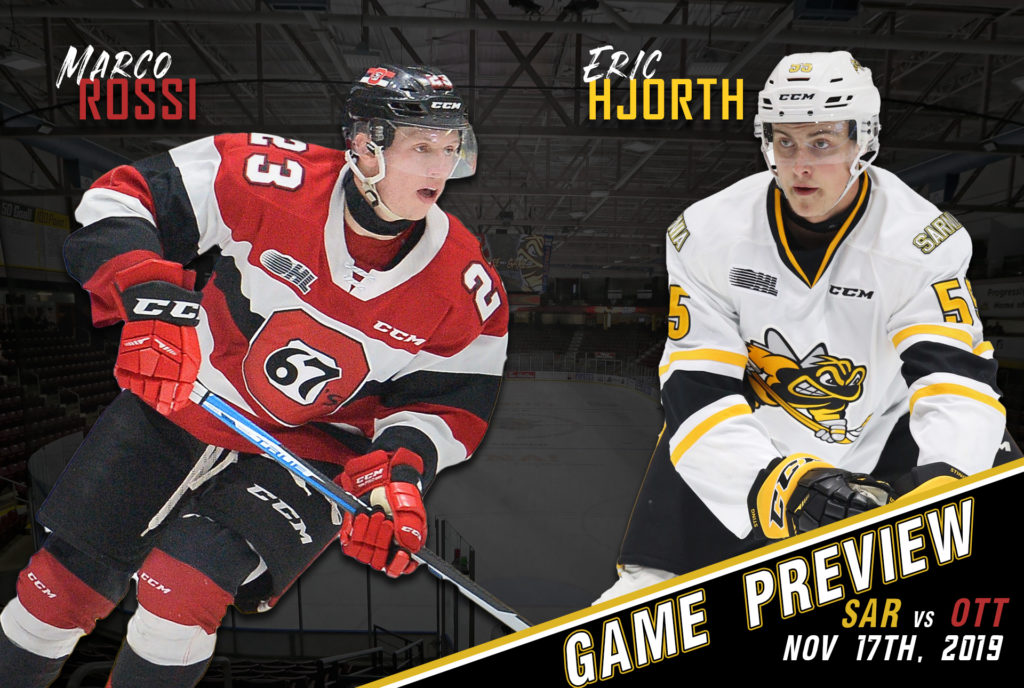 The Sarnia Sting are set to welcome the defending Eastern Conference Champion Ottawa 67’s this afternoon in some Sunday action. Sarnia enters coming off a 6-2 loss Friday night in Mississauga to the Steelheads where nothing seemed to go their way. These games happen though, not every team can be perfect. Sarnia is 8-2 in their last 10 games with one of those losses coming against the 67’s in Ottawa; which the 67’s won 7-2.

Ottawa is one of the tougher teams in the league, getting great contributions from NHL Draft eligible Marco Rossi and veteran defenceman Noel Hoefenmayer, as well as solid goaltending from Cedrick Andree. The 67’s are coming off a win last night in Flint against the Firebirds after losing on Thursday night against the Saginaw Spirit. This 67’s team is not one to be taken lightly as they are great in both ends of the ice. They’ll look to skate away with their second win on the weekend as they wrap up a 3 game Eastern Conference road swing.

The 67’s enter this contest with the league’s 2nd best powerplay, currently operating at 30.8%. The Sting will have to be disciplined and stay out of the penalty box if they want to succeed against a dangerous Ottawa team.

Jamieson Rees – The Carolina Hurricanes 2nd round selection in the past NHL Draft has been unstoppable since returning from suspension. Rees is currently riding a 12 game point streak where he has put up 29 points and has also been dazzling fans with highlight reel plays seemingly on a nightly basis. Look for the 18 year old to find his way on the scoresheet as he’ll look to help his team avenge the loss to the 67’s earlier in the season.

Sam Bitten – ‘Bitsy’ has settled in nicely as a member of the Sting, finding a place along side Ryan McGregor and  Jacob Perreault on the 2nd line and becoming a fan favourite in the community. Bitten was traded from Ottawa in the offseason looking for more opportunities and so far he’s made the most of it; having contributed 15 points in 19 games. The former 67 has yet to record a point against his old team, but Bitten will look to change that this afternoon.

Marco Rossi – The NHL Draft eligible forward has been putting up great numbers to start his sophomore season in the OHL. The Austrian has 29 points in 16 games so far this year and is showing no signs of slowing down. Rossi is a highly skilled playmaker, having 23 assists. His vision and passing accuracy make him dangerous every time he enters the offensive zone.

Noel Hoefenmayer – In his overage season Hoefenmayer has been finding great success that has carried over from last season. The 2017 Arizona Coyotes 4th round pick had 62 points in 68 games last season and currently is on pace to surpass that mark; having 28 points in 20 games so far this season which is good enough to lead the league in scoring for defenseman.

.@noelhoefenmayer keeps giving us good stuff, so we’ll keep posting it! #OHL Defenceman of the Month tickles the twine as the late man off the rush, helping the @Ottawa67sHockey earn their 6️⃣th straight win 🔴⚫️⚪️ pic.twitter.com/XRrrVwgOtu

The puck drops on the final meeting this season between these two teams at 4:05pm this afternoon on home ice at the Progressive Auto Sales Arena. Secure your seats to any upcoming Sarnia Sting home games by calling the Mainstreet Credit Union Sarnia Sting Box Office by calling 519 541 1717 or shop online here.