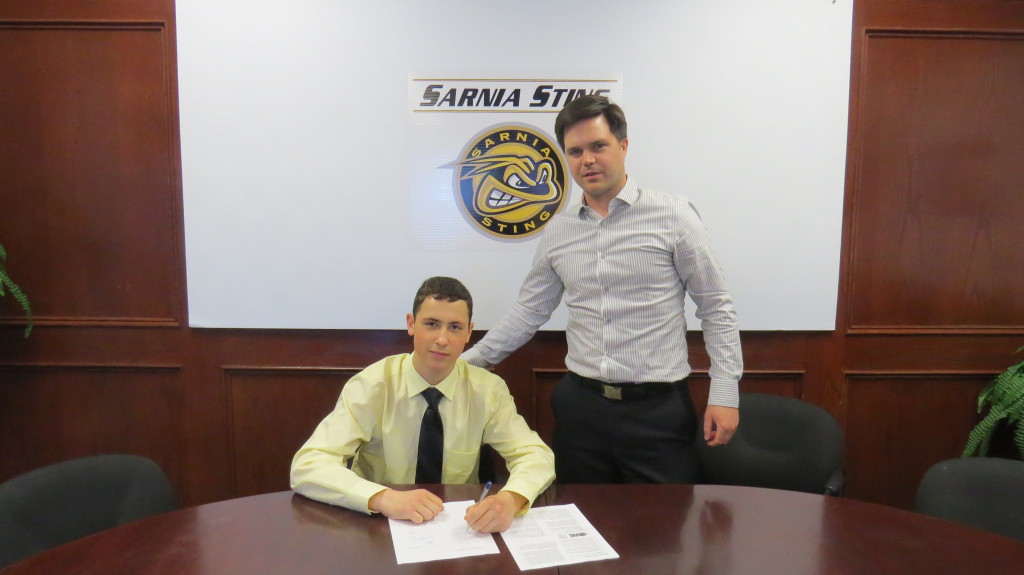 Sarnia Sting General Manager, Nick Sinclair is pleased to announce that 1st round pick, Sasha Chmelevski has agreed to terms on a Standard Player Agreement with the Hockey Club.

Selected 10th overall in the 2015 OHL Priority Selection, Chmelevski is an offensively gifted player who plays a well-rounded game. Last year, Chmelevski recorded 10 goals and 14 assists for a total of 24 points in 25 games with the Honeybaked U16 Program.

When asked about the type of player he is, the 15-year-old comments, “I’m a playmaker. I pride myself on making players around me better on the ice, that’s what I do.” The 5’11”, 171 lb centreman had an impressive showing at Orientation Camp last month, scoring once and adding two helpers in the first scrimmage game.

Chmelevski comments on today’s announcement, “It feels great, I’m excited to be a part of the organization and can’t wait to get on the ice with all of the guys and just have a good year. I’ll be training all summer, just working on overall strength and getting ready for playing this type of game.”

Sinclair comments on the Sting’s most recent signing, “We are excited to formally welcome Sasha and the Chmelevski family to the Sarnia Sting Hockey Club. Sasha is a character young man whom we feel has a very bright future in our league and beyond. As an organization, we’re excited to provide him with the opportunity to further develop his skills and assist him in working towards his goal of playing professional hockey.”