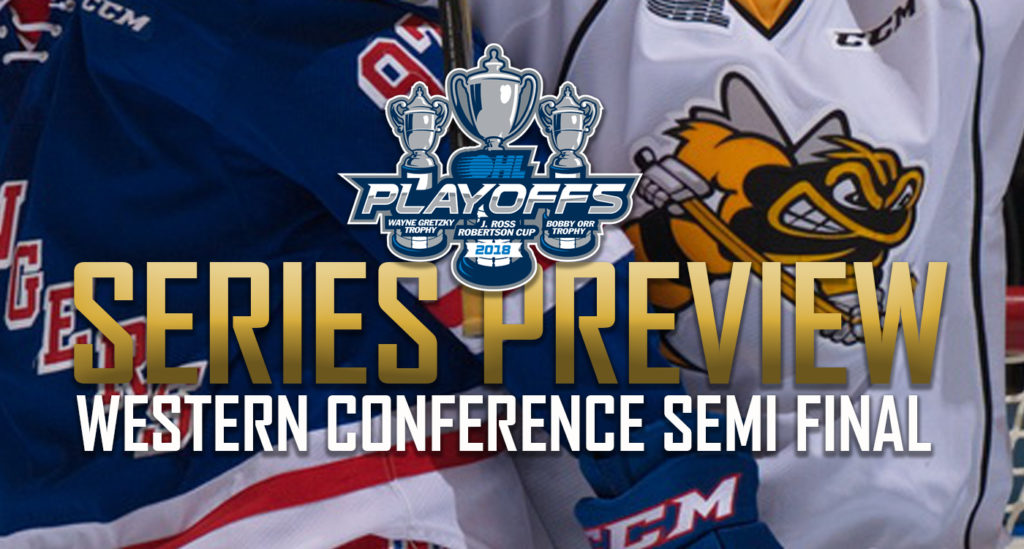 We’re on to the second round. The Real Season continues.

In the quarterfinals, the Sarnia Sting eliminated the Windsor Spitfires in six games. Now, we’re ready to take on the Kitchener Rangers.

These two teams have been battling near the top of the Western conference all season long. Now meeting in a long-anticipated postseason matchup, the Sting and Rangers are ready to get going.

Have a look at our upcoming second round schedule below.

Let’s dive into what we can expect to see on the ice come Friday night. We’ll check things out from each position and include potential “X-Factors” in this series.

We can’t talk about what happened in the first round without talking about Sting forward Sean Josling. After going pointless in his first OHL playoff experience last season, Josling exploded for nine points in the opening series. Sting fans are hoping for more of the same against Kitchener.

Import forward Hugo Leufvenius also showed up big time against the Spitfires. Leufvenius’s five goals led all Sting skaters. The trio of Josling, Leufvenius, and centre Ryan McGregor combined to form Sarnia’s most dominant line. Depth throughout the lineup breeds postseason success, and the Sting hold plenty of it.

IN GAME | Need a big goal? Just call up @jordan_ernst16 and he's got it covered every time! 💪💪#BelieveTheBuzz #SARvsWSR pic.twitter.com/MmE1X4PmTp

Kitchener brings a plethora of firepower up front.

From first-round NHL draft pick Logan Brown to captain Connor Bunnaman, the Rangers can bring a ton of offence at any given time.

Brown led the Rangers in first round scoring with thirteen points in six games. Long-time Rangers forward Adam Mascherin had eleven. Kole Sherwood led the Blueshirts with seven goals and, like Mascherin, holds one of the OHL’s most dangerous shots.

Farther down the depth chart, forwards Riley Damiani and Joseph Garreffa may not carry the size of a Brown or Bunnaman, but they come in as two of Kitchener’s most dependable secondary options.

The X-Factor: Givani Smith. Acquired midseason from Guelph, Smith is a wrecking ball. The Sting have had some good times with Smith this season. Smith will be putting it all on the table.

The Sting showed off an outstanding defensive effort in their quarterfinal. Finding reliable two-way play throughout the defence core, the Sting excelled.

Veteran blueliners Theo Calvas and Cam Dineen each played near the top of their games. Add to that the always dependable play of Mitch Eliot and Connor Schlichting, and the Sting found themselves with a tremendous group. Moving into Friday night’s game against Kitchener, look for Dineen to add yet another gear.

The X-Factor: Schlichting. The overager has just about seen it all in this league. Whenever the Sting see Schlichting open up into pushing his offensive pace, big things happen. Against the Rangers, there’s no better time than now to go all out.

Logan Stanley is the story on the Kitchener blueline. Having won the Memorial Cup last season, Stanley is back for more. It’ll be up to Sarnia’s dynamic forwards to prevent that from happening.

Austin McEneny and Michael Vukojevic stand as the Rangers’ other defensive forces. McEneny also won last year’s championship alongside Stanley in Windsor. Vukojevic is a rookie who joined the Blueshirts midseason. The freshman has used his big body to fit right into the OHL’s definition of postseason hockey.

The X-Factor: McEneny. The overager has continuously beat the odds over the last few seasons. McEneny is simply one of those guys who has found a lot going for him in recent times. That’s dangerous come playoffs.

Both the Sting and Rangers showcase overage talent between the pipes. Sarnia boasts the homegrown Justin Fazio. In our opening series against the Spitfires, Fazio recorded a 2.70 goals against average and a .881 save percentage.

Kitchener goalie Mario Culina joined the team midseason after a trade with the Sudbury Wolves. Culina started the year with Ryerson University. In Kitchener’s first round series against Guelph, Culina posted a 3.08 goals against average and a .908 save percentage.

We’ll see you at The Hive for game three! Let’s keep The Real Season going.

Fans can secure their seats for the playoffs by calling the Mainstreet Credit Union Sarnia Sting Box Office at 519–541-1717 or by checking out the link below.