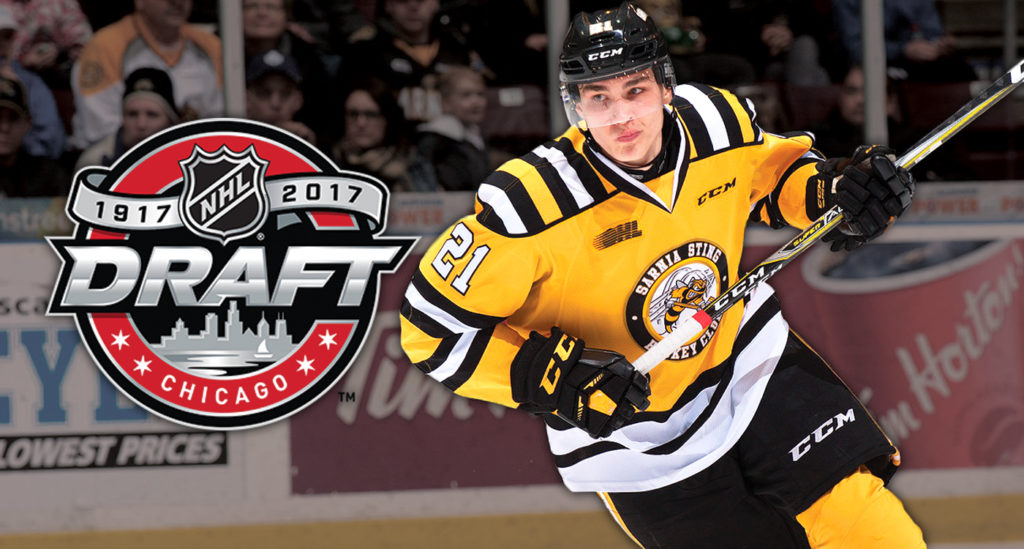 SARNIA, ON– With the 2017 NHL Draft set for Chicago, IL this weekend (June 23 & 24). Four members of the Sting find themselves included on the final edition of NHL Central Scouting’s Draft Rankings.

Leading the way for the Sting contingent is 6’4″ centreman, Adam Ruzicka who had a stand-out season for the Sting while also having the honor of representing his home country of Slovakia at the World Junior Hockey Championships. In Ruzicka’s first season in North America he posted an impressive 46 points (25 G, 21 A) in 61 games played for the Sting. Adam also received OHL Rookie of the Month honors for the month of February.

Rymsha was passed on in his original draft year last season, mainly due to a leg injury that kept him out of the majority of the 2015-16 season. However, he caught the eye of NHL scouts this past year, recording an impressive 62 points between his time in Ottawa and coming over to the Sting at the trade deadline. Since the Sting acquired Drake in January of 2017 he was able to contribute an 20 goals and 13 assist in just 28 games with the club.

Although left off the list by Central Scouting in the final edition, Sting Defenceman Nick Grima & goaltender Aiden Hughes could hear their name called this weekend.

Rounding out the list of eligible Sting players includes rookie goaltender, Aidan Hughes who was ranked 28th among North American goalies at the mid-term. Aidan held a record of 7-8-3-0-1 this past season. The London-native was originally chosen in the second round of the 2015 OHL Priority Selection by the Sting.

You can find all draft results related to the Sarnia Sting on our social media channels as well as sarniasting.com.