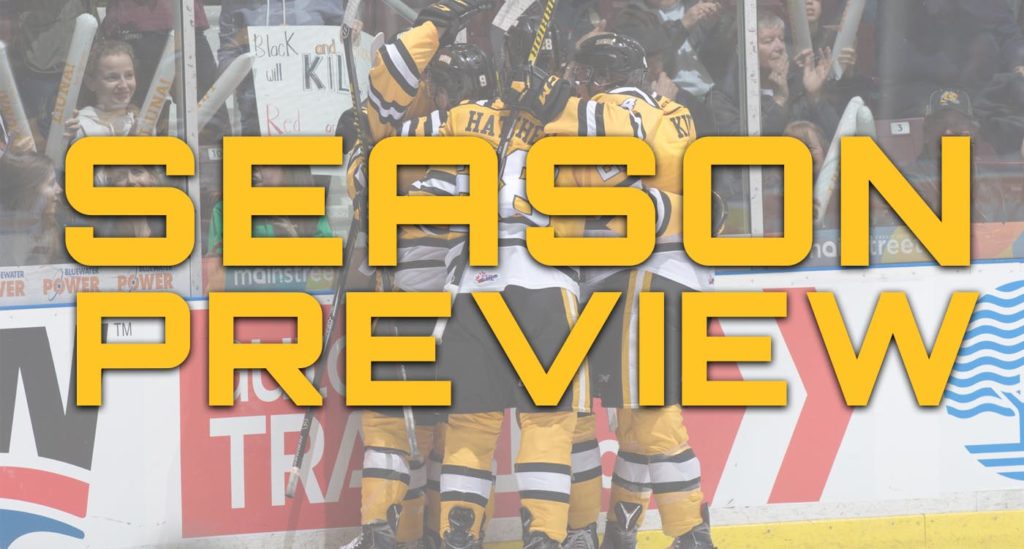 Back again for another season, the Sarnia Sting are ready for a new run at the playoffs.

After the disappointment of last season, and not having several key pieces return from the National Hockey League, the Sting have regrouped, added some parts, and are set for a wide-open battle in the OHL’s Western Conference.

Sarnia will open the season this Friday, September 22 with an away matchup against the Guelph Storm.

Your Sting home opener will be the very next day, September 23. The Kitchener Rangers will visit Progressive Auto Sales Arena for what should be a thrilling Saturday night contest.

Let’s take a look at the group that will take the ice this season.

All indications suggest the Sting will have an incredibly strong group up front this season. This year’s team will be led offensively by veteran forwards Jordan Kyrou, Adam Ruzicka, Ryan McGregor, Drake Rymsha, Anthony Salinitri, Jordan Ernst, and Troy Lajeunesse.

Kyrou is coming off a season which saw him put up 30 goals and 64 assists, good for a total of 94 points in 66 games played. The 2016 St. Louis Blues second-rounder is expected to once again be an offensive dynamo for the Sting. Kyrou will also be pushing hard for a spot on Team Canada’s World Junior team to compete at the 2018 World Junior Championships in Buffalo, New York.

Ruzicka, an import player in his second year with the Sting, was recently selected by the Calgary Flames in the fourth round of this summer’s 2017 NHL Draft. After scoring 25 goals in his first season with Sarnia, Ruzicka will be expected to post even better numbers this time around. A 6-foot-4, 200-pound centre, Ruzicka will return as a huge presence down the middle of the ice.

McGregor, a Burlington, Ontario native now in his third OHL season, was chosen by the Toronto Maple Leafs in the sixth round of this summer’s draft. The reliable winger will be a key two-way piece of Sarnia’s forward group. McGregor recently competed in the Maple Leafs’ rookie tournament, scoring a goal against Ottawa in Toronto’s second and final game of the weekend.

Rymsha enters his fourth OHL season, his first full one in Sarnia. Acquired from the Ottawa 67’s midway through last year, Rymsha finished the campaign with 33 points in 28 games. After a leg injury during the 2015-2016 season, it was a tremendous bounce back season. His performance came with a massive reward: the Los Angeles Kings selected Rymsha in the fifth round of this summer’s draft. Rymsha will be a valuable leader for the Sting this season.

The skilled Anthony Salintri will be expected to be one of the Sting’s top goal scorers alongside Kyrou. A draft choice of the Philadelphia Flyers in 2016, Salinitri enters his fourth OHL season. Salinitri had 28 goals and 30 assists in 66 regular season games last year.

Ernst is coming of an incredible preseason for the Sting. Now heading into his second season in Sarnia, the overage Ernst had six points in four preseason games. In Sarnia’s final preseason game at home against Windsor, Ernst had a hat-trick performance. Ernst split time last season as both a defenceman and forward, but is expected to play up front this year. Ernst was primarily a forward through minor hockey.

Troy Lajeunesse, a former free agent signing out of the Greater Ontario Junior Hockey League, will continue to be an example of commitment and hard work for Sarnia’s younger players. Lajeunesse is coming off a career year, one which saw him record 18 goals and 22 assists. Look for him to hit the 20-goal marker this season.

Alongside these six central forwards, the Sting will have a steady group of younger players pushing the pace, cycling the corners, and providing their own offensive support. Curtis Egert, Brady Hinz, and Franco Sproviero among others all return with another summer of development under their belt.

Jamieson Rees is the freshman forward to watch in Sarnia. Rees was the Sting’s first round choice, ninth overall, in this past spring’s OHL Priority Selection. Rees spent his minor midget year with the Mississauga Reps, captaining his team to the 2017 OHL Cup championship. In 32 regular season games with the Reps last season, Rees recorded 40 points. Rees is currently sidelined with a lower body injury after getting injured at Hockey Canada’s U-17 camp in July.  Upon his return, he will be a welcome addition up front.

Hugo Leufvenius is a rather “large” addition to Sarnia’s forward group. Selected in the first round of this summer’s 2017 CHL Import Draft, the 6-foot-3, 220 pound Swede will contribute offensively right away. Leufvenius had a strong preseason for the Sting, recording five points in four games. Flashes of outstanding skill were shown consistently, and he’ll only become more confident as the season goes on. Leufvenius is eligible for the 2018 NHL Draft.

Sarnia enters the season with a relatively young group on the back end. After graduating two veteran defencemen in Jeff King and Kevin Spinozzi, the Sting will have plenty of opportunity for young blueliners to step up.

Connor Schlichting is entering his fifth season as a member of the Sting. He’ll be looked at as a defensive rock.

The Sting have ample talent ready to take the next step in their careers. Theo Calvas, Nick Grima, Kelton Hatcher, and Braden Henderson will be key pieces of Sarnia’s blueline.

A couple of promising rookie defencemen will be getting their start in Sarnia this season as well. Alexandre Hogue and Colton Kammerer were chosen in the second and third rounds, respectively, in this past spring’s OHL Priority Selection. Hogue was known as one of the most skilled defencemen in Ontario minor hockey last season. He had 47 points in 45 games with the HEO U-18 Cumberland Midget Grads. Kammerer won the OMHA Championship as a member of the Whitby Wildcats.

The Sting enter the season with a clear-cut starter in Justin Fazio. Now entering his overage season, Fazio is far and away the most experienced goaltender on Sarnia’s roster. Fazio will continue to run the crease in the city he was raised in.

Fazio had a 3.68 goals against average and a .896 save percentage in 52 games last season.

Aidan Hughes is set to be the backup netminder once again this year. The London, ON native returns for his second full campaign in Sarnia.

The West division will be in tight competition this season. Flint, Saginaw, Sault Ste. Marie, Windsor, and your Sarnia Sting are all stronger teams on paper.

It’s time to hit the ice.