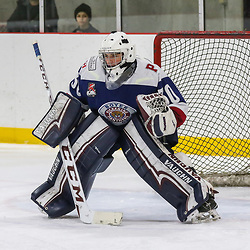 General Manager Nick Sinclair announced today that the Sarnia Sting Hockey Club has received a commitment from 2017 sixth round selection Ethan Langevin. He is the seventh player from this past OHL Priority Selection to make a commitment to the Sting.

The Brooklin, ON native was selected out of the 2017 OMHA Champion Whitby Wildcats Minor Midget Program, Langevin is currently playing for Pickering Panthers of the Ontario Junior Hockey League. In 19 games played he has posted a 2.79 GAA and a .903 save percentage. Langevin also participated in Hockey Canada’s Under-17 Development Camp for Team Black this past summer as only 1 of 5 OHL drafted goaltenders invited.

Sinclair comments on today’s announcement “Ethan has made impressive strides with his development over the past eight months. After being selected to Hockey Canada’s U-17 final camp in Calgary during the summer, he has carried that momentum into a strong rookie season with Pickering up to this point. Ethan has earned this opportunity.”