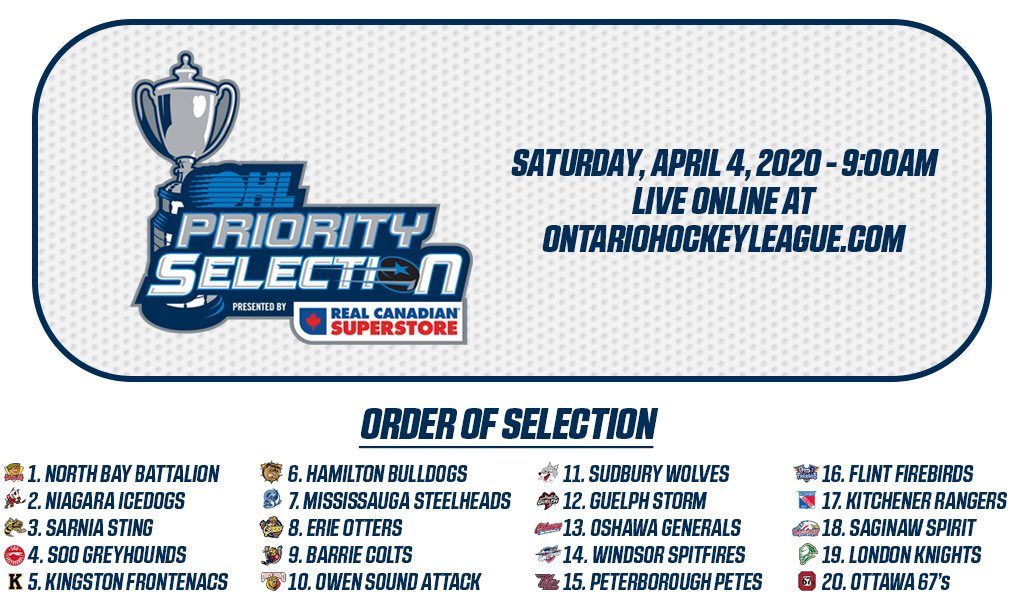 Round 1: Pick 3 Max Namestnikov, Detroit Honeybaked
The Sting’s first round is all about skill. The 5’6”, 150 pound centre was a offensive threat for the Detroit Honeybaked U15 Program, scoring 12 goals and 11 assists in 13 games for the Honeybaked team, but that was not all he did. During other competitions, Max scored 53 goals and added 75 assists for 128 points in just 59 games. Max has a amazing drive and will scare away from anyone or any situation, despite his small stature. Max was one of the main forces that lead the Honeybaked team to winning the 2019 International SilverStick tournament in Whitby Ontario. Max is the younger brother of current Colorado Avalanche winger Vladislav Namestnikov.

With the 3rd overall selection the Sarnia #Sting are extremely pleased to select @Max_Namestnikov! #OHLDraft

Welcome to #StingNation Max, We can’t wait to get started! pic.twitter.com/cZwRGTZUwb

Round 2: Pick 34 Matthew Morden,Toronto Titans
The Sting with their second selection in the OHL draft, chose Matthew Morden from the Toronto Titans of the GTHL. The 6’3” 161 pound defenseman was the captain and the top scoring defenseman for the Toronto Titans, scoring 5 goals and adding 16 assists for 21 points in 33 games for the Titans who ended the season number 7 in the OHL Cup Rankings. Matthew also played in one game for the Burlington Cougars of the OJHL this season, adding an assist in the game.

The Sarnia #Sting are proud to select Matthew Morden!

Round 3: Pick 51 Ryder McIntyre, Ajax-Pickering Raiders
The Sting with their third selection in the 2020 OHL Priority Selection selected 6’2.5” 207 pound Right Winger Ryder McIntyre from the Ajax-Pickering Raiders. The Stouffville native was quite the goal scorer in the regular season scoring for the Raiders scoring 24 goals in 36 games, as well as adding 17 assists for 41 points. Ryder was also an assistant captain for the Raiders, who played all the way to the OMHA Championship play in game, and were slated to play in a OHL Cup Qualification game.

Welcome to #StingNation Ryder, we can’t wait to see what’s in store! pic.twitter.com/XmpVEAk7Nt

I’m truly honoured to be selected by such a first class organization! I’d like to thank my parents, coaches and trainers who help me get to where I am today. Most importantly I’d like to thank my teammates for all of our success! I can’t wait to get started in Sarnia🐝 https://t.co/rRTptEb10F

Round 5: Pick 83 Seamus Casey,Florida Alliance U16
The Sting selected Seamus Casey from Estero, Florida with their 4th pick of the Draft. The 5’10” 150 pound Defenseman scored 11 goals and 18 assists for the Florida Alliance U16 program last season. Seamus also suited up for Team USA in the Youth Olympic Games last winter playing in 4 games for his country.

The #Sting are pleased to select Seamus Casey with the 83rd Overall Pick in the #OHLDraft.

Round 6: Pick 103 Liam Eveleigh,Waterloo Wolves
For the Sting’s first pick in the sixth round and fifth pick overall, the Sting select Defenseman Liam Eveleigh from the Waterloo Wolves. The 5’10” 192 pound defenseman from Elmira Ontario played in 28 game for the Wolves scoring 7 goals and added 13 assists for 20 points on the season. He was also the assistant captain of the team, who had qualified for the OHL Cup before the tournament was ultimately cancelled.

The #Sting are excited to select @EveleighLiam with the 103rd Overall Pick in the #OHLDraft.

Round 6: Pick 107 Gavin Brindley, Florida Alliance U-16
The Sting’s second selection in the sixth round and our sixth pick overall was Right Winger Gavin Brindley from the Florida Alliance U-16. The 5’8” 150 pounder from Estero,Florida was a force offensively this season, scoring 21 goals and added 28 points for the Alliance in just 20 games. Brindley also represented the United States at the Youth Olympic Games scoring 1 goal and adding a assist in 4 games for his country.

The #Sting are proud to select @BrindleyGavin with the 107th Overall Selection in the #OHLDraft!

He signed a Tender with Tri-City in the USHL, but players have been lured away before.

Tons of skill and speed, makes lots of plays in traffic, fearless player. If they get him to report he’s a potential star.#OHLDraft

The Sarnia #Sting are pleased to select Julian Facchinelli. #OHLDraft

Welcome to #StingNation Julian, we can’t wait to see what’s in store! pic.twitter.com/NP2KL4VmzD

#81 Julian Facchinelli from the Markham Majors scored 8 goals at the Toronto Titans Tournament in 4 games. I didn’t see the Majors since there are a million teams in this tournament, but take notice of that! #OHLDraft

Round 8: Pick 143 Dylan Grover, Kitchener Jr. Rangers
With the Sting’s eighth round pick, we selected Goaltender Dylan Grover from the Kitchener Junior Rangers. Dylan is a 6’3” 148 Pound goalie from Rochester, New York. Dylan played 19 games for the Jr.Rangers organization this season, posting a 3.45 GAA. Dylan looks up to current Dallas Stars goalie Ben Bishop as an inspiration for playing hockey.

The #Sting are excited to select goaltender Dylan Grover with the 143rd Overall Pick in the #OHLDraft.

Round 8 – Pick 143 – Sarnia Sting select Dylan Grover from Kitchener Jr. Rangers. Another tall netminder who faced a lot of rubber this year. https://t.co/4C0RZGGCdM

Round 9: Pick 163 Zach Filak, Detroit Compuware
For the Sting’s ninth pick, we go back to Detroit to draft Zach Filak from the Detroit Compuware U16 Program. Zach is a 6’01” 177 pound Centreman from Northville Michigan. Zach scored 3 goals and added 7 assists in 14 games for Detroit Compuware, while also adding 36 penalty minutes.

The Sarnia #Sting are proud to select @FilakZachary!

Round 10: Pick 183 Austin Harper, Lambton Jr. Sting
With their tenth pick, the Sting picked up local Right winger Austin Harper. The 5’6” 139 Wyoming native recently played for the Lambton Jr. Sting scoring 16 goals and adding 19 assists for the Sting. Austin also played 4 games for the Sarnia Legionnaires adding 2 assists.Austin is hoping to join the list of local players like Nolan DeGurse, Franco Sproviero, and Justin Fazio to play for the Sting Organization.

The #Sting are excited to select HOMETOWN KID @AustinHarper_24 of the @LambtonAAA with the 183rd Overall Pick in the #OHLDraft!

Austin Harper of the @StingU16 has been taken by Sarnia. One of my favourites this season who caught fire and helped will his team into the Playdowns. Powerful skater and smart with the puck. Scored a lacrosse style OT Goal and almost help send the Chiefs packing. #OHLDraft

Round 11: Pick 203 Ryan Transit, Detroit Little Caesars
With the Sting’s eleventh round, they go back to Detroit for the third time this year, drafting Detroit Little Caesars’ defenseman Ryan Transit. The 5’8” 180 pound skater from Royal Oak, Michigan, Ryan played a major part in a successful year for the Little Caesars program. While Ryan only recorded 2 goals and 1 assist in 15 regular season games for the team, Ryan played an instrumental part in keeping the puck out of his team’s net.

Round 12: Pick 223 Nicholas Messina, Vaughn Kings
With the twelfth selection in the OHL Priority Selection, the Sting selected Nicholas Messina from the Vaughn Kings Organization. A 5’5” 137 pound Left Winger, was known for scoring some goals in the GTHL, scoring 11 goals and adding 8 assists in 33 games for the Kings, while also contributing to the Kings Cinderella run to the GTHL Finals.

Round 13: Pick 243 Joshua Vogelsberg, Mississauga Reps
They used their thirteenth selection in the OHL draft on Left Winger Joshua Vogelsberg. The 5’10” 143 pound, native of Woodsbridge Ontario had a good 2019-20 season scoring 8 goals and adding 9 assists in 36 games for the Reps.

The #Sting are pleased to select Alfred Fang with the 283rd Overall Pick in the #OHLDraft. 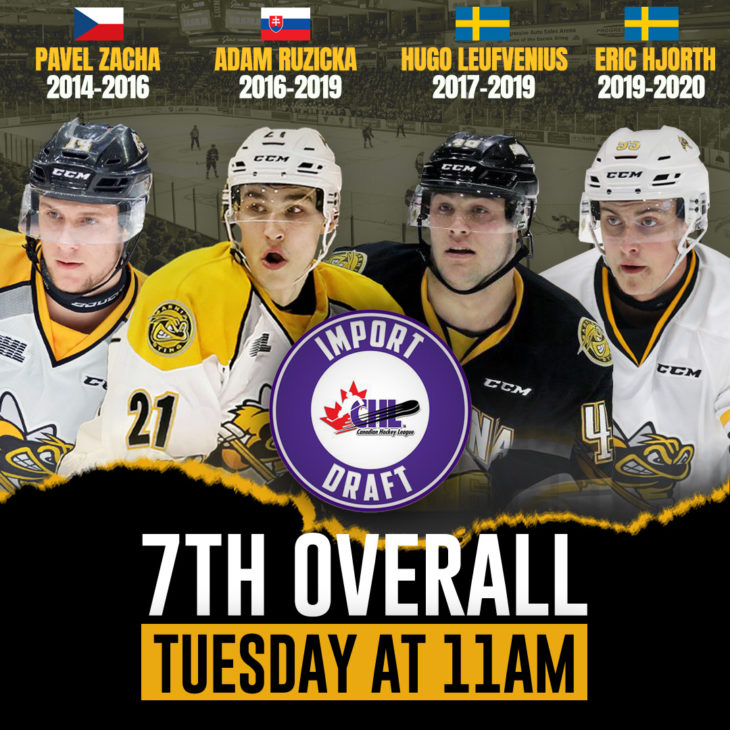 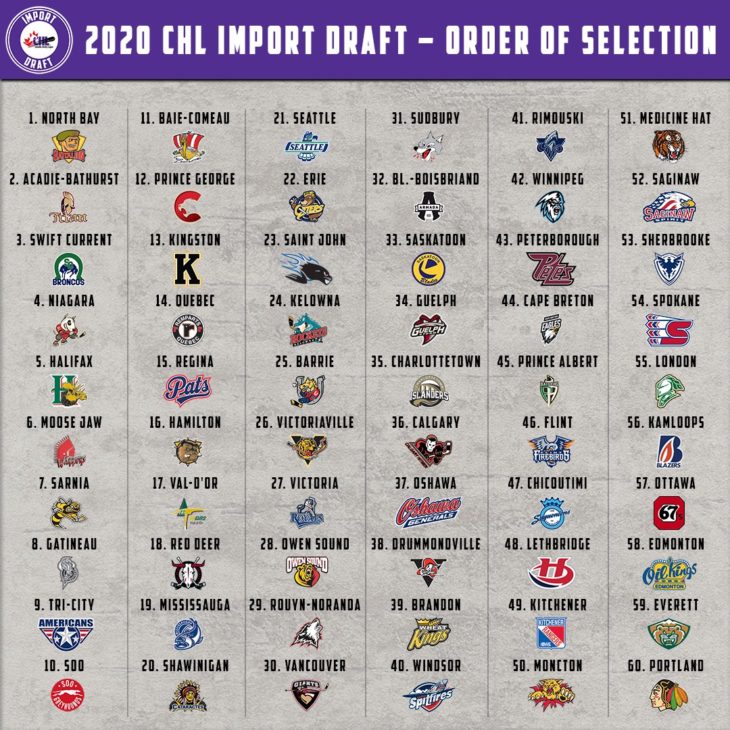 Geci, a 6’2” 176 lbs forward split this past season with HC Slovan Bratislava U20 (Slovakian U20) and Lukko U18 (Finish SM-Sarja) where he tallied a combined 31 points. The Slovakian native also suited up for his country at the 2020 U-17 World Championships in which he recorded a goal and an assist in three games played.

In 2018-19, as a 16-year old, Geci recorded almost a point per game playing for the U20 HC Slovan Bratislava. Sting General Manager Dylan Seca comments on the newest acquisition.

“We are very happy to have acquired Alex in today’s Import Draft. He is a big, strong two-way center who skates very well and has high offensive instinct. We expect Alex to jump into our lineup and contribute right away. Sting fans will come to appreciate his compete in all three areas of the ice and has a level of character that is required to wear the Sarnia Sting crest. We are looking forward to Alex getting here and getting started, congratulations to him and his family.”

The Sting elected to pass on their second-round selection as Swedish defenseman Eric Hjorth will return to the 2020-21 Sarnia Sting lineup.